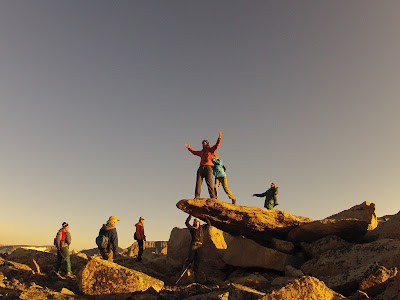 Maryott Lake is not a layover day, but we sneak in a summit ascent by getting up at the absurd hour of 3 in the morning for a bouldery ascent of Sky Pilot Mountain.   Sky Pilots being those rather weird flowers which only grow above 11,000 feet of elevation and smell rather like a skunk.  But they are blue and pretty, and which makes up for a lot of smell.   Sky Pilot Mountain bumps just over 12,000 feet, which didn't seem so bad after a few weeks living at 10,000 feet.  But the start in the dark isn't fun...our headlamps aren't really useful under a bright moon and among tricky large boulders.  Plus we take a turn too early and end up exposed over a knife-edge to the summit rather than coming up the valley.  Whoops.  What were we thinking?  By sunrise we are casually walking up to the summit along the plateau top, which offers some of the nicest hiking we've had in a while.  It's cold and windy but calving glaciers and mountain goats distract us.  The Beartooth Mountains are laid out like a patchwork quilt around us.

We're down by 9 am, just in time to cook breakfast and pack up for a move over to Jasper Lake.  It's a short move but we are all tired and hangry by the time we reach our second to last camp of the trip.  Hangry being defined as "so hungry and tired that we become cranky until we are fed".   While we are cooking supper, 4 mountain goats come to visit.  They lick the rocks where we've peed, and generally get so nosy we have to scare them away.  They run off into the cliffs and entertain us with some heady mountain goat leaps. 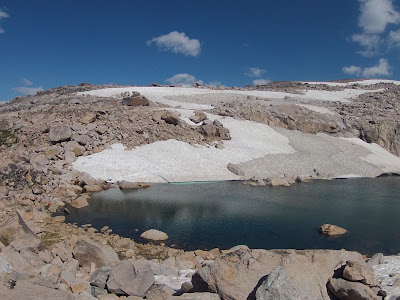 But not much time to rest.  Our final hiking day may be the biggest of our trip.   It's only 3 miles, but it's up and over an 11,000 foot saddle with full packs, and a scree descent down to Glacier Lake that we've all been dreading since Doug first brought up the idea.   We know it's our last day though, and we make it a good one.  Two parts...first we slowly climb up to the saddle...my team selects a big scree field with boulders big enough to swallow us.  They shift and move and generally scare the crap out of us, but we made it to the top devoid of adrenaline.   I have to admit that ascent choice was not one of my better ideas.

Car sized boulders cover the top of the saddle, where the I team plays endless games of yahtzee while waiting for all teams to first ascend, then descend the scree on the other side.   It's slow going in gigantic, never ending boulder fields.  We're all sick of rock hopping by this point, knowing that just one shift would be enough to pin and break an ankle or leg.  Our team finds some snowfields, making a quicker descend to the lake and avoiding some rocks.  But it's a long day for everyone, taking 9 hours to go just 3 miles.  15 grateful faces regard our final climbing camp above Glacier Lake when we arrive.  The tents won't move for a week...no more hiking. 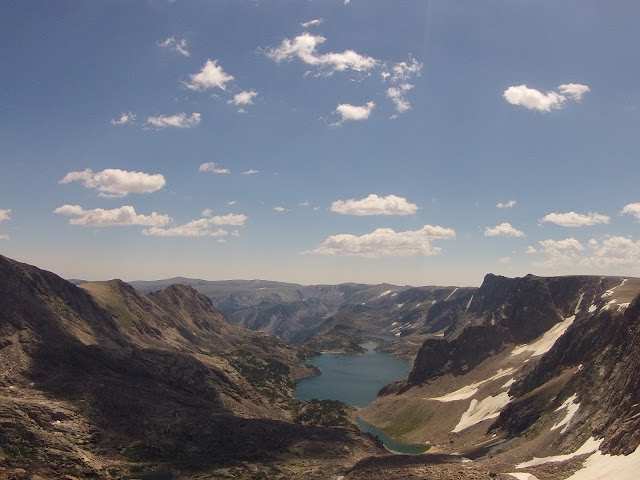 Or is there?  With empty packs (and some empty bellies) we descend down a couple thousand feet to our final resupply, where a truck meets us with another 5 days worth of food.   And much climbing gear.  Ropes, harnesses, slings, helmets, carabiners, and lots of trad.  Our packs are not empty or light on the way up.  I'm having another tough day...with a light pack on the nice trail, I am tripping and sliding all over, trying not to look like a total beginner at walking.   On the way back up, I put my head down and concentrate on putting one foot in front of the other.

So 4 days of climbing ensue.  I must admit I too tired to concentrate for the first couple days...a side effect of hiking with heavy packs for most of the last 17 days.   It was a mental switch for all of us...from packing up to not moving.  We learned to set up anchors, rappel, ascend, climb, and mange a top rope site.  It was quite fun, in a different sort of way than our hiking had been the rest of the time.

Of course, by that time we were really smelly, tired of eating oatmeal and rehydrated hash browns, and ready to get back on the bus back to Lander.   Some one taught me once that if you are doing a fun activity, you should quit when you are still really having a great time.  This way you will remember loving it and will want to do this again.   I love backpacking and being in the backcountry, but perhaps a shorter time period might suit me better.  I like showers too much.  I think I've mentioned that already.

Anyway, all good things must come to an end, and we reached our last day, to the relief of some and the disappointment of others.   Our newly loaded packs, this time with climbing gear, too, were shouldered for the last time.  The trail descent seemed to go quickly, but the bus couldn't navigate the rutted gravel road to the trailhead.   We continued walking, on hard ground which pounded our tender feet.  3 miles turned into 5 before the bus came into the view of our grateful eyes.

We managed to find pizza and ice cream for dinner in a passing town, but we weren't done with camping yet.   Our final night was spent in the Wyoming desert, under skies flashing with lightning bolts.  We sorted all our gear to turn back in, then stayed up late to reflect on the journey we had just come through.

I'm not sure why I wanted to sleep with no tent...oh, wait I wanted to fall asleep under the stars for at least one night on our expedition.  Why I thought it was a good idea with thunderstorms around, I really can't say.  At 2 in the morning I woke to raindrops falling on our sleeping bags, and hurriedly tossed the rainfly over us and got it set up.  Not quickly enough, though, as I was then damp and rather smelly the rest of the night.  Ooops.

At least the next day was bringing us to clean clothes and the almight shower, so it didn't matter too much.   We made quick work of sorting our gear in Lander, the quicker to get to our showers, our cell phones, and back to the real world.  A few more debriefings, a dinner out on the town (salad, at last) for a last hurrah with our group, and then it was over.  We'd be going our separate ways the next morning, back to real life and the rest of our lives.   I hesitate to get sappy, but such a journey like this was intense in a lot of ways.  We might not meet up as a group again, but we won't forget, either.   And sometime down the road of life we'll realize just what we learned on this and other life experiences and our lives will be better because of it. 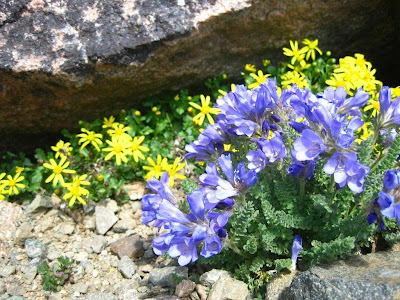 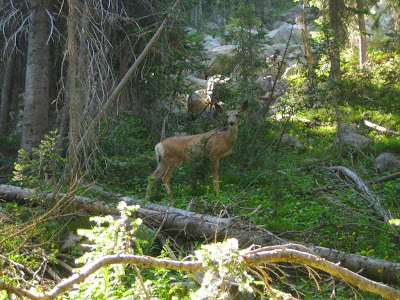 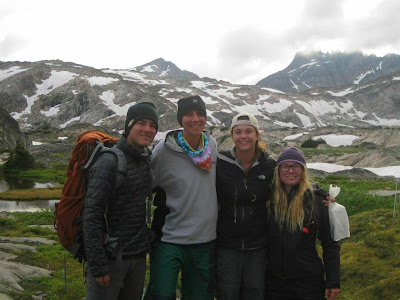 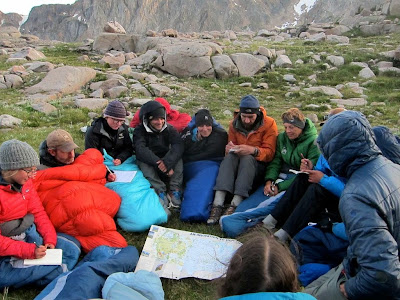 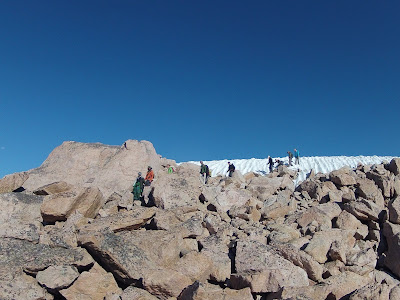 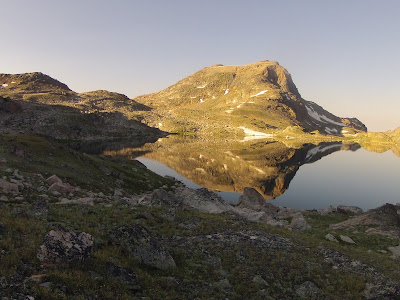