So the end of the story has to come first.  I managed to go 23 days without a shower.  Pretty amazing, I know.   I can't say I liked the smell of myself by the end of that time, or my tent mates either, but it wasn't that bad.  Well...you can get used to smells after a while, right?

Back to the beginning.   I signed up for a NOLS (National Outdoor Leadership School) backpacking course.  The Outdoor Educator Course, to be precise.    Some backpacking, some rock climbing, and lots of learning.   Oh, and no showers.  Have I mentioned that already?

Our first day in Lander, WY was chaos, and started early.  Sorting out gear, bagging food, and trying to fit too much crap into an overly heavy backpack was the order of the day.   I managed to whittle my pile down a little, but probably still brought too many clothes, not knowing how cold it was going to get out there high in the mountains.

11 of us were packed and ready by noon, waiting on the last student, whose flight had been delayed by weather in Denver.  When Kate showed up it was a rush to get her up to speed and then pack the bus.   By mid afternoon we were sweltering in triple digits on the school bus, chugging our way up to Montana to explore the Beartooth Mountains, just across the border from Wyoming and within spitting distance of Yellowstone. 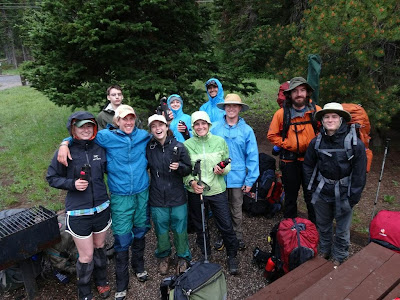 Fate didn't smile on us for our arrival in the mountains...by the time we pulled into the trees for the beginning of our adventure, it was 9 pm, getting dark, drizzling, and there were immediately mosquitos buzzing around our heads.  It was a race to see who could pull out warm clothes, raingear, and bug nets the quickest.  I hadn't packed very judiciously in camp and regretted that immediately.   With darkness falling, we were quickly on the march, just a short ways down the trail, carrying our heaviest loads of the whole trip, already tired just from lifting the packs onto our shoulders.

Our first camp was tough, snuggled between a river and a trail and the very best we could do in the dark.  Our instructors Ryan, Lindsay and Doug weren't going to let the weather beat them, though, and gave us thorough classes on how to set up the tent, put our food in the bear enclosure, and how to shit in the woods.   Yup.   I'm still laughing about it now.   I suppose some people have never had to do such a thing before, so by the light of headlamps, Doug taught us about the orange plastic trowel and how deep to dig the hole, etc, etc.  When he said, "We are going to call this Dominating", we all had a chuckle.  Then we decided to name the trowels, "Lennie".    So for the rest of the course, when anyone had to go #2, the cry went out, "Dude, I have to Dominate....where's a Lennie?"

At any rate, before midnight we were snuggled into our tents with 3 of our new closest friends.  The tents were pyramids, with just trekking poles to hold them up, making them pretty lightweight and very easy to set up.  Was there a lot of extra room in them...well no.  The four of us, Amanda, David and Kate managed to get in and out without kicking anyone in our sleep.  Although there was talk of me hugging someone's legs at some point.   I don't actually admit or deny that.

When we woke up the next morning we learned how to cook over our whisperlite stoves, and dug through the 8 days worth of food we were carrying to last us until the next resupply.  Our tent groups were our cook groups, and somehow we had to figure out how to eat and share enough food to last for 8 days without ending up with a bunch left over. 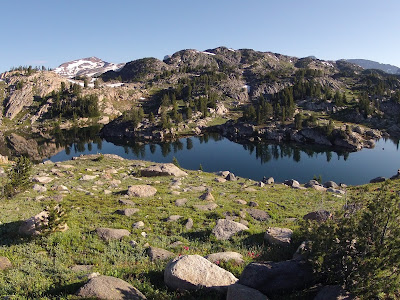 The next couple of days were honestly a blur.  There was a lot to learn about basic skills of backpacking, but mostly I remember the mosquitoes.  They followed us around while we were hiking, cooking, peeing, Dominating, fishing, giving classes, and even into the tents (where we smushed them with a vengeance).   It was pretty hot, even at 9,000 feet of elevation, but we wore wind pants, wind shirts, and head nets to keep the little critters off us, and hiking in that garb was a sweaty mess.   Plus they still bit my ankles because I though gaiters weren't worth the weight of bringing them along. 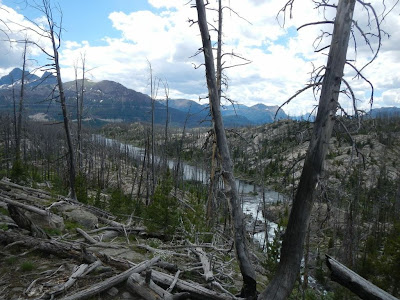 The trail we were on petered out somewhere that first morning, as we knew it would from reading our topo maps.  Then there may have been a few torturous hours of climbing up steep drainages full of deadfall trees while humping a backpack weighing something more than 40 pounds but hopefully less than 50.   But what made it all worthwhile were the lakes, the wildflowers, the vistas, the beautiful campsites, the rocks, and the great group of people I was with.  You know, in every group, there's bound to be "that person" where you secretly cross your fingers and hope that they don't get put in your tent group.   Not in this group...all 15 of us were really cool and easygoing and fun to be around. 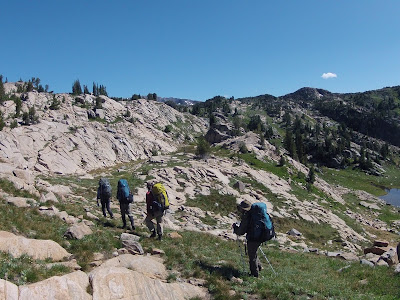 On the afternoon of our fourth day, in the midst of a beautiful panorama of snowfields, scree, boulders, high altitude lakes, and towering peaks, a miracle happened.   I stopped, looked around, and exclaimed "There's no mosquitos!"   That was may have been one of the best moments of the trip.  We had just ascended over 10,000 feet, and it was glorious to take off my headnet, strip down to shorts and my Tshirt and kick relieved footsteps into the next snowbank taking us up to our campsite. 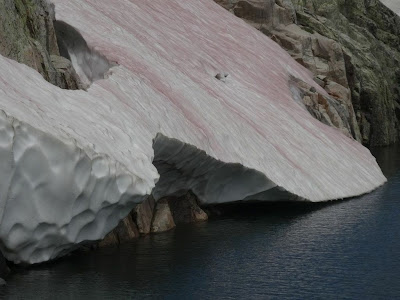 We stopped that afternoon in a beautiful cirque, surrounded by high peaks and looking over blue alpine lakes.  Leftover snowfields calved floating glaciers into the water, and a passing mountain goat came curiously close to our camp during a class.  Best of all, we could sit in the waning sunshine without the sight of everyone running around in bugnets and swatting at mosquitoes.  Towering over us to the north was Montana's highest mountain, Granite Peak, at 12, 799 feet.

To be continued....
NOLS Backpacking: Part 1 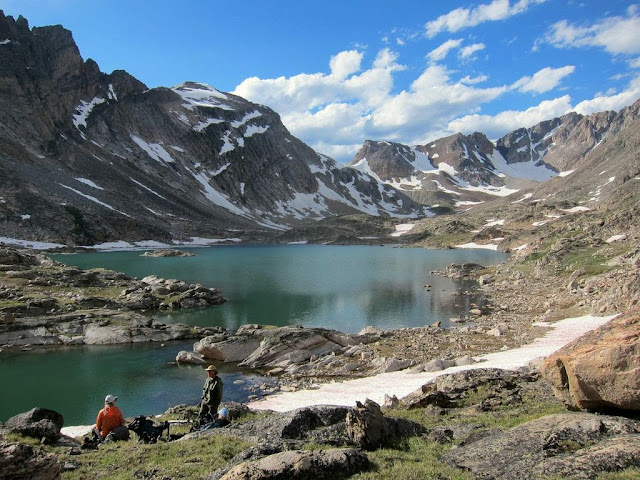 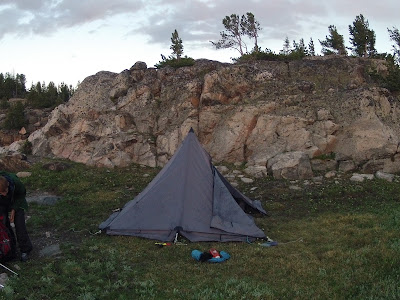 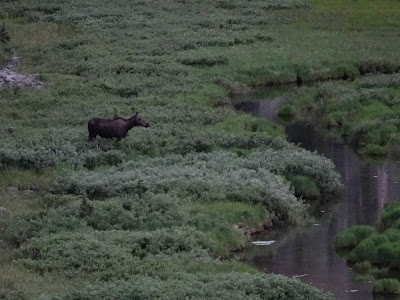 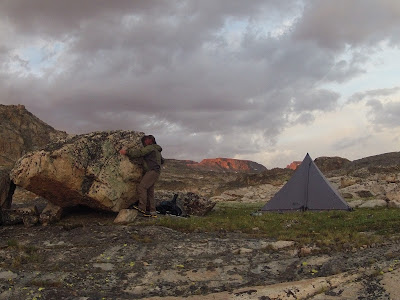 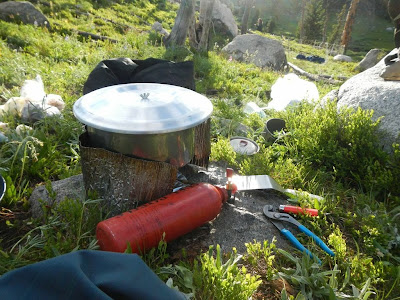 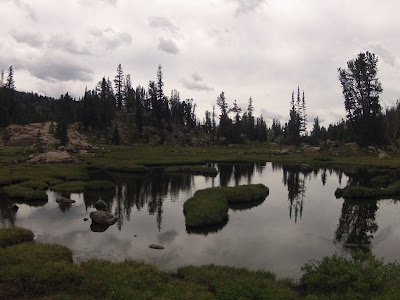 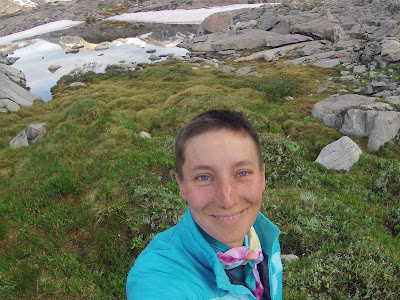