Alternatively Titled: The Misadventures of my First Solo Backpacking Attempt!

For many months I have wanted to get out by myself.  Love it, hate it, don't know until I try it.  The 53-mile Nidderdale Way was an obvious choice for a short weekend round.   The best part?  I could walk out my front door and be down at the trail in minutes.   Oddly enough I hadn't been on any of the trail yet, aside from a few short miles. 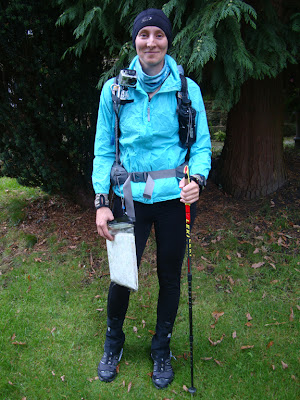 Friday afternoon saw me walking down the sidewalk and waving goodbye to Rob.  It was mild, I was in no hurry (yet) and with a small tree-identification book in hand, I was feeling up leaves as I ambled down the trail.  Ripley Castle came and went, along with a lot of unremarkable scenery, remarkable in that it was all rather pleasant, even in a quick rainshower.

Almost October and the days are short, the coming darkness saw me peering desperately for a spot to hide out for the night, just short of Brimham Rocks and the boggy moors that surround them.  Many likely-looking sleep spots were filled with cows, sheep, in sight of houses, or just plain soaking wet.   Finally, a good spot, hop a fence and set up my bivy bag.  The wind died, the (almost) full moon rose, and I had a wonderful evening cooking over my stove and laying down watching the stars.

Just short of sleep and short of midnight, I hear a motor (strange for my location), and peek out of my bag to see a 4-wheeler driving slowly around the field with a flashlight waving around.   I hunkered down in my

I packed up quickly in the morning and around the bend found a concrete pad, which I shared with some mud and random animal bones for a sheltered cooking spot.  Breakfast was an epic fail.  My alcohol fuel was too cold to light, I guess, requiring that I swap to my good fuel.  Trying to pour it back into the bottle (from a holey cat food can stove) was almost pointless.  Once I had a good boil, I failed to stir up my rice (boil in a bag) pudding at all early enough, leaving crunchy bits of rice in the bottom and rendering it inedible.  Uh-oh, my food ration suddenly seemed a little short.  The bag of now-congealing rice pudding went back in the pack as dead weight. 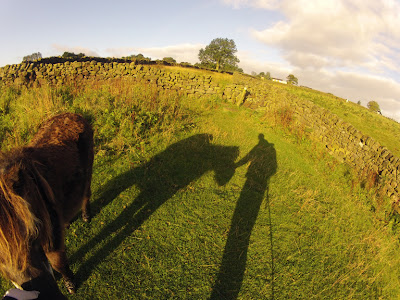 Saturday was sunny, if quite windy, and never quite warm enough.  I stayed on the move, surprising at least 1000 pheasants from the path.  No, I'm not exaggerating, I think there were a few pheasant "farms" near the trail to help out with the population.  Mid day found me still battling a headwind and skirting the edge of Masham Moor, heading for the most northwest point over Scar House Reservoir Dam.  Along the way I crossed a completely dry creekbed, remarkable after the monsoonal rains we had earlier in the week.  I speculated that the water must have diverted into one of the many potholes (caves) in the area.  This would not be a good week to go spelunking. 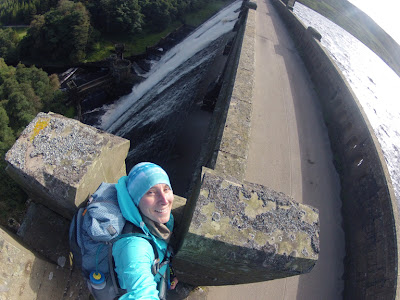 The dam overflow at Scar House was really kicking up, putting on quite a show for visitors.  It must have been really crazy a few days earlier.  I was mostly grateful I would now be walking with my back to the wind, over the moor and back down to How Stean Gorge.   It was near there that I accidentally forgot to shut off my GoPro camera after taking a photo...after snapping 1,847 worthless photos at 2-second intervals, it finally beeped to complain that the memory card was full.  Given the limited field options of the GoPro, and no spare chip, there were no more photos to be taken.  Into the pack it went.

After 11 hours of walking for the day, I hopped another fence on top of a likely deserted hill, and found a lush pasture just past a "private road" sign, with no hint of animals, poop, soggy ground, people or unwanted 4-wheelers.  Aren't I particular. I had just dumped my gear all over the grass when I heard a woman walking by yelling at her dog.  Luckily she was so busy watching the dog (who probably knew I was frozen behind the rock wall), that she didn't notice me then, or again when she walked back a few minutes later.  It was windy in my little rock corner, the moon was soon obscured by clouds, and my stove fuel (warmed by a few minutes in my armpit) still went out at least 7 times.   I managed to eat and then burrowed inside the bivy, which kept me surprisingly warm even if the wind was whacking the cloth into my head.

I woke to a light rain in the morning, and wondered what to do about it.  With no small amount of contorting, I was able to stuff my sleeping bag away and slip into full rain gear before I opened the door to the bivy.  The sad news was that I didn't feel like fighting with my stove for a hot breakfast.  Sadder still was the contents of my food bag.  Congealed rice pudding, uncooked couscous, and a few gels.  They would have to last me the last 15 miles to get home, which was looking like a long, soggy way.  Raiding all the pockets of my pack only turned out a few squares of leftoever chocolate.  I guess 6000 calories (minus rice pudding and couscous) wasn't enough for a 45-hour tromp through 50 miles of valley trails.    (Yes, I could have stopped in one of the many villages I passed through for additional supplies, but I wanted to be self-sufficient.)  No, gels don't even taste good when you're hungry...why did I even pack them?  This wasn't a race. 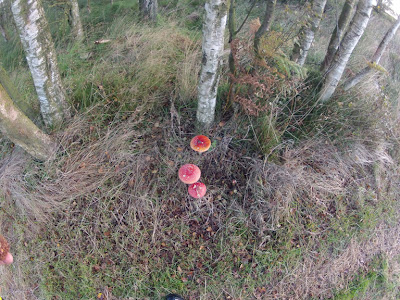 I had managed to keep my feet mostly dry for a day and a half, no mean feat

Let me just say that a little rain is no fun.  A lot of rain ruins even the strongest wish to stay outside.  Yet driving rain or not, the high moor trail south of Pateley Bridge was beautiful.  In the fog, the deep crevices in the cliffs held green ferns, and the damp atmosphere transported me straight to the rainforest in New Zealand.

The last few miles of trail were along the River Nidd.  A few days before, it had been raging at the highest flood levels in recorded history, due to heavy rains over just a day and a half.  Sure, that only resulted in a couple inches total of rain, but around here in the UK that's a month's worth, and enough to send everyone rushing for needed sandbags.  The river was trickling along nicely enough now, 15 feet below me, but there was clear evidence that most of the trail had been underwater in the flood, with some of the path rather washed out.

I arrived home close to noon on Sunday, soaked to the skin, looking like a drowned kitten and ready to raid the kitchen.   In short order I was washed, dried, fed, and watching football on the couch.   Amazing things, houses.  I really like mine sometimes.

So did I enjoy going out solo?  Well, yes.  Well, no.   I would have prefered it to be warmer, and sunnier.  Then I would have packed more food, and walked slower, and nosed into my book for a few more tree discoveries.   Then again, I always say I want to slow down...perhaps in a warmer climate I even would.   It is nice to have friends on the trail, too...I don't think I'll audition for a hermit anytime soon! 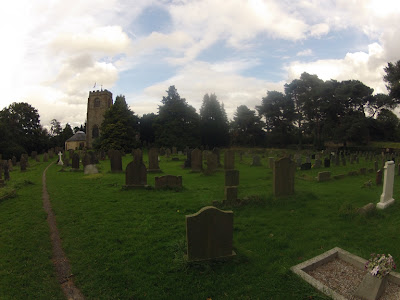 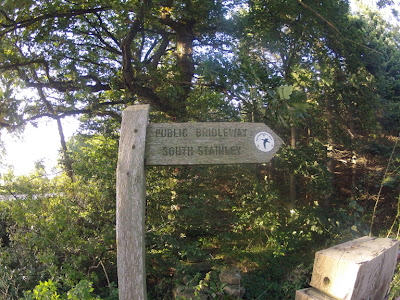 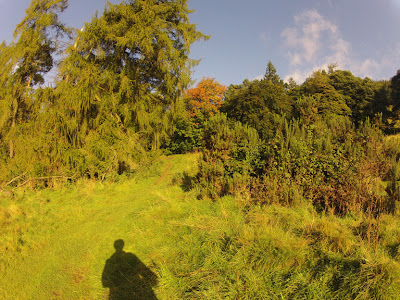 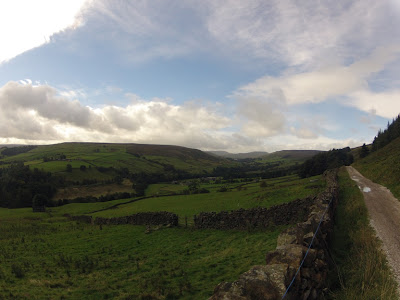 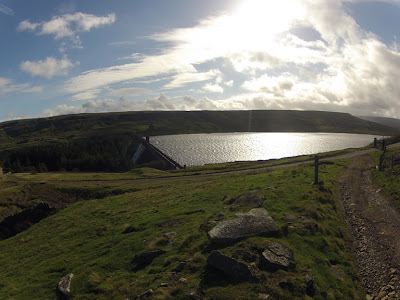